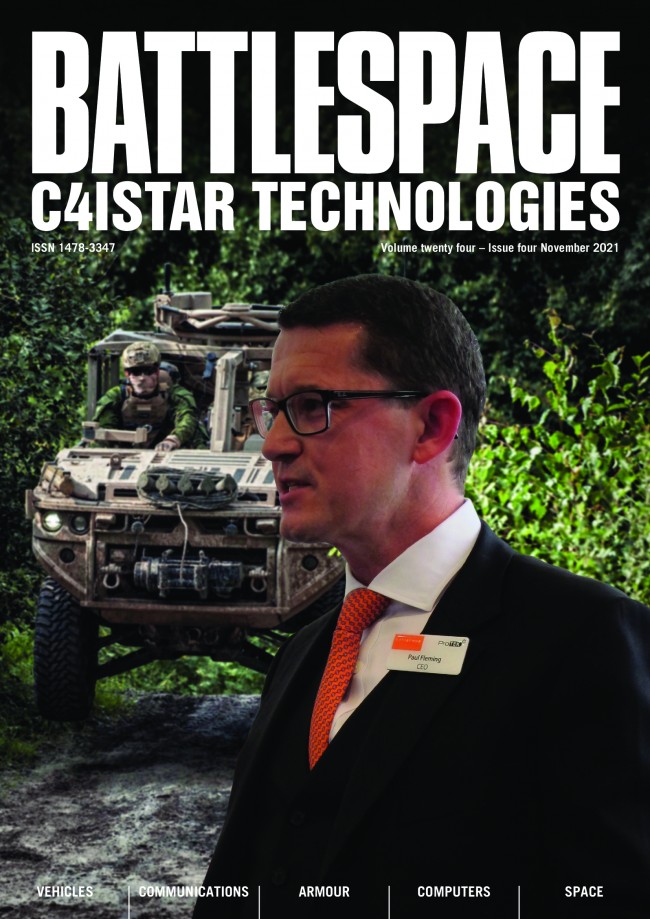 Paul was thrilled with the nomination saying, ‘Many thanks to Julian Nettlefold and BATTLESPACE for the nomination and of course anyone who thought I was worthy of their vote. Very much looking forward to catching up with past winners and industry colleagues at the Chepstow Race Day in aid of SSAFFA in November.’

Click here for the November issue of BATTLESPACE and turn to page 24 for the full story.

You have had the dual challenges of Brexit and COVID since your selection by the Dutch MoD, how did you manage these challenges?

Brexit was no problem in the end, there are some additional processes and procedures but no more really than we currently do for non-European exports, there were a few minor delays initially at point of entry/exit, but these now seem to have been resolved. COVID did throw up some challenges though. We closed both facilities for three weeks at the start of the pandemic. This obviously put all production and deliveries on hold for a short time, but it gave us the time to rearrange the production areas and implement other Government HSE requirements to allow us to get back into full production safely. Fortunately, we had only just upgraded all our IT and telecoms to the very latest cloud-based systems so we easily transitioned to a home working environment, allowing our sales and support staff to continue supporting our customers without any interruption, some home working will actually remain in place going forward as we have found it beneficial in certain areas. Production output got back to normal relatively quickly and has increased significantly over the last 12 months, which is a great credit to the management team and staff.

What was behind the formation of TEK Military Seating?

My father and I took over Transport Equipment Kingston (TEK Seating Ltd) 39 years ago, a small commercial seat distribution company based in Kingston-Upon-Thames that was about to close its doors, I was just 17. I started driving my old Mini 1000 from Tunbridge Wells to Kingston each day, the M25 wasn’t finished in those days so it took a while! For the first year I worked with the manager who had agreed to stay on, learning the products and cutting my teeth in sales, Dad then joined full time and we worked together for 9 years before he retired. TEK Seating now specialises in the supply of all types of seating to civil and military customers in the truck, bus, agricultural, heavy construction, light commercial vehicle and marine markets, with facilities in Tunbridge Wells and here in Leicester, where we employ a total of 40 people.  We supply aftermarket end users as well as large work vehicle fleets and have supply agreements with a number of key (OEM) manufacturers such as Plaxton, ADL, Wrightbus and Optare. One key customer that demonstrates our depth of products is the Port of Felixstowe where we manage the seating for all their work vehicles, ship to shore cranes, tugs, forklift trucks and container handlers, Felixstowe are a 24/7 – 365 operation and they can’t afford to have a vehicle down due to seat issues; we also supply all of their office chair requirements. We have also moved into automotive seating, recently working with Morgan Motor Company to design, develop and manufacture their driver and passenger seats for the Plus 4 and Plus 6 models for 2022 production and beyond. To broaden the strength and depth of TEK Group, we acquired SitSmart 17 years ago which specialises in workplace seating for 24/7 users such as emergency services, control rooms, government agencies, power stations and CCTV operators, one of our largest customers is Network Rail who we have supplied for over 10 years and have just been awarded another 5-year contract after a competitive tender process. We also supply seating for individuals that may need something a little extra such as people dealing with a disability, the Army’s Headley Court facility (now Stanford Hall MOD Rehabilitation Centre) is a regular customer. Ten years ago, given the terrible injuries received in Afghanistan and Iraq, we saw a need for the design and production of specialist IED mine blast mitigation military vehicle seating, so TEK Military Seating was formed.

TEK Military Seating is a global supplier of ProTEK® OEM vehicle seating to the military vehicle sector. Designed and manufactured in the UK to the highest standards of safety and protection, the ProTEK® brand includes a wide range of Driver, Commander, Crew, Gunner, Turret, Loaders, and bespoke seating for most types of military vehicle, both legacy and new build. With modularity and flexibility at the core of each seat design, ProTEK® seating can be modified to offer maximum fit and function without the need for additional tooling or major design changes, utilising innovative modules which can be attached to most seats to create a solution for our customers’ requirements. Most ProTEK® seats are available in Stanag 4569 AEP55 blast protection versions, in both stroking and non-stroking variants.

Who was your first customer?

MIRA in the UK approached us to design and build a blast and vibration mitigating seat for the Buffalo MRAP vehicle. For our first project we customised an existing civil seat. The seat was successfully tested and integrated by MIRA and entered service. We went through a big learning curve after this contract and developed a team of expert designers and engineers to develop our own range of military seating from lightweight Special Forces mesh seating to MRAP blast mitigating seats. To that end my brother Mike, who was senior product designer for one of the major worldwide commercial seat manufacturers, joined TEK.

How many seats have you sold since you formed TEK Military Seating and how many worldwide customers do you have?

TEK Military Seating brings together the group’s vast portfolio of tried and tested seat components with in-house seat design and manufacture offering defence customers the highest levels of safety and protection. The creation of the ProTEK® brand of military seating has introduced new innovations, modularity, and new technologies to the marketplace, with ProTEK® now recognised as a global market leader valued for its quality, robustness and cost effectiveness.

As far as numbers go, let’s just say it’s in excess of 20,000. For obvious reasons some of our customers are confidential, but we have an extensive international customer base which includes most of the major military vehicle manufacturers and integrators - BAE Systems, RBSL, Supacat, Lockheed Martin, RUAG, Patria and NIMR to name just a few. We are also actively involved with several new and ongoing requirements in the UK.

Do you see future growth prospects for military seating?

Very much so, we only formed TEK Military Seating 10 years ago, which in military terms still makes us the new kid on the block. The combination of an increasing appetite for innovations in IED protection and safety cases has created strong demand for military vehicle seating which will continue for many years to come, at TEK we also have decades of experience in shock and vibration mitigation gained from the commercial sector which is becoming a very hot topic in the military vehicle environment which will also drive future demand. We have a strong order book, and we also provide lifetime support for our customers which can extend to 30 years. We are fully qualified to ISO 9001/14001, AQAP standards as required by all the major defence contractors. Military seating will account for around 50% of our forecast £12 million + turnover this year and is expected to grow significantly over the coming years.

Do you have a large R&D budget?

The international terrorist is a clever, cunning, and innovative individual who is constantly inventing IEDs and other explosive devices to overmatch existing armoured vehicles. To that end our R&D and design team is dedicated to keeping abreast with all these devices as best they can to build in the resilience and safety factors into our seating products. TEK Military Seating is a major global designer and manufacturer of vehicle seating for the defence sector, with a wealth of experience and innovative solutions whilst raising protection and safety standards across all platforms. Innovation and modularity are at the core of our product development, which enables us to offer a wide range of modules to tailor seats to customer requirement, without the need of additional engineering and tooling. TEK Military is constantly looking to design products to help improve safety and protection, to that end we developed our ProTEK® seating range. The development of ProTEK® seat belt pads are another example of simple, low-cost products making a huge difference. The fitting of ProTEK® pads on a harness seat belt reduces shock impact by over 65% when a vehicle is involved in a blast event or traffic accident. The ProTEK® SV foam within the pads protect occupants from excessive shock forces, often experienced by occupants in such events.

The ProTEK® seating range includes solutions for driver, commander and crew, as well as more bespoke requirements such as loaders, turrets and limited space seating within main battle tanks and tracked artillery howitzers. Our expertise within legacy fleets, improvement of safety and protection standards, improved functionality, utilising modern materials and processes to reduce weight, whilst making stronger seats, has become a benchmark within our brand. Working closely with our customers on both new build and legacy fleets, we offer a full CAD integration service and FEA modelling to maximise protection and safety levels, whilst keeping costs down. Our advances in blast attenuation seating have been industry and market leading, with the introduction of ProTEK® SV – a specially formulated foam insert developed to be integrated into most of our ProTEK® range of seats, further improving on the blast mitigation performance. ProTEK® SV has been designed to reduce shock forces during a blast event in a none stroking seat – fully tested and certified it offers Stanag 4569 AEP55 blast protection levels of mitigation that are normally only achievable in a fully stroking mine blast seat, the benefits of a non-stroking seat are obvious - less weight, less space claim, less maintenance and lower cost.